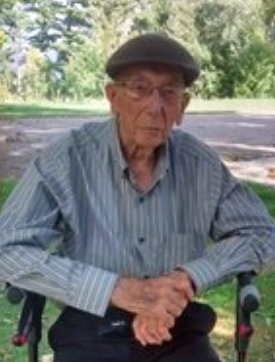 Please share a memory of Robert to include in a keepsake book for family and friends.
View Tribute Book

FLEMING, Robert Frank Ian.  Age 99 of Waterloo Ontario, latterly of Arnprior, passed away at The Grove Nursing Home, Arnprior on October 13, 2019.  Rob was born on June 7, 1920 in Edmonton, Alberta to Mildred (Hillman) and Frank Fleming.

Rob was a veteran of WWII.  He served from 1940 – 1946 in the RCAF as a Radar Technician, primarily in the U.K.  After the war, Rob studied at the University of Alberta, earning his B.Sc. in Mathematics.  In 1950, he moved to Waterloo to begin his career at Equitable Life Insurance; he retired as Supervisor of Underwriting in 1985.  Rob met Isobel Rowe, who had recently emigrated from Northern Ireland, and they were married in September 1951.  Together they created a family and became part of the community through active involvement in St. Columba Anglican Church, their neighbourhood, and several bridge clubs.  Rob was a devoted husband and father.  He earned his ham operator’s license, and he was fascinated with computers.  He liked cats, baseball, numbers, bridge, radios, astronomy, orchestral music and pipe bands.

The family thanks Dr. Becker and the very caring and skilled team at The Grove Nursing Home, Arnprior Ontario.  Visitation at Erb & Good Funeral Home, 171 King Street South, Waterloo on Tuesday, October 22 from 7 – 9 pm.   Funeral service at Erb & Good Funeral Home on Wednesday, October 23 at 11:00 am.  Interment will be at Parkview Cemetery, Waterloo.  In memory of Rob, donations may be made to St. Columba Anglican Church, Waterloo, or the Arnprior Regional Health Foundation, (specifying The Grove Redevelopment), or to a charity of your choice.

Look inside to read what others have shared
Family and friends are coming together online to create a special keepsake. Every memory left on the online obituary will be automatically included in this book.
View Tribute Book
Share A Memory
Plant a Tree